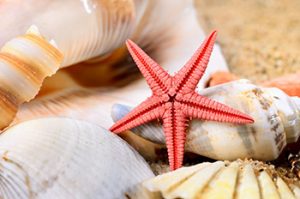 They typically have a radial symmetry with five or more ‘arms’ which radiate from an indistinct disk shaped centre. Starfish do not have movable skeletons, but instead possess a hydraulic water vascular system. The water vascular system has many tube feet on the arms, which function in locomotion and feeding.

As these creatures are echinoderms and not actually fish, they are more correctly know as Sea Stars. There are about 1,800 species and they inhabit all of the Earth’s oceans. Sea Stars are often brightly coloured, usually from reddish hues to violet, and in some species blue and green colours exist. All species have a simple eye at the end of each arm. The eye is able to detect differences of light and dark, which is useful in detecting movement.

Several types of toxins and secondary metabolites have been extracted from Sea Stars and these are now undergoing research worldwide for uses in pharmacy or as pesticides. Some species have the ability to regenerate lost arms and can re-grow an entire new arm over time. Most species must have the central part of the body intact to be able to regenerate, but a few can grow an entire starfish from a single ray.